This week Stuart King, jazz guitarist and composer extraordinaire did a wonderful live online workshop for FretDojo entitled Breaking Out of the ii-V-I: How to Make Your Own Jazz Chord Progressions That Sound Great.

As one participant Karl remarked afterward:

“The workshop was about 3 years of theory explained in little over an hour!”

In the leadup to the workshop, I got a lot of emails from people indicating that they would have loved to attend, but couldn’t due to the time zone differences.

So, for the benefit of all you guys and gals that couldn’t make it, here is the complete replay of the workshop in all it’s glory, along with some notes on the ideas Stuart put forward in his presentation.

How This Workshop Came About

As a bit of background, many of you know I’ve been helping co-produce Stuart’s debut album of original jazz guitar compositions Qualia, which has just been released – get your copy here!

The idea for the workshop came to me in the studio during the final mixing sessions for the album.

What struck me was how interesting and innovative the chord progressions were that Stuart was using in his compositions, so much so I couldn’t help but ask Stuart to reveal all his techniques to the FretDojo community.

Without further ado, let’s get into it!

Below are some notes on the workshop as well as diagrams of chord shapes you can use to get started with modern jazz chord progressions on guitar.

Stuart kicked off his presentation with an overview of typical Cycle 5 root movement.

This refers to the traditional movement of the root notes of chords via the interval of a perfect 5th.

You can manipulate this standard root note movement with tritone substitution, a well-known technique in jazz harmony to create variety and to facilitate smooth voice leading from chord to chord.

Stuart’s opening track on Qualia, Forty One is a good example of this technique in action:

You may ask here:

“So what is a tritone substitution anyway?”

Have a look at a G7 chord and a Db7 chord, pictured below:

As you can see, these chords share two of the same notes – only the root note has changed.

These two notes are the guide tones – i.e. the 3rd and the 7th. The intervallic distance between them is known as a tritone.

Therefore, as the chords are so similar, they can be used to substitute one another.

Hence the term ‘tritone substitution’ – whereby you substitute one chord with another that has the same tritone.

In bar 12 of Forty One, Stuart uses this technique – substituting a Db9 in place of where you would expect a G7 chord to be:

Although this is a well-known technique, you can play with it in interesting ways.

In the next example, Stuart does the same substitution but also does a tritone substitution on the C7, using a Gb13 chord instead.

Therefore, we now have a cycle 5 root movement off the tritone substitutions, giving us what’s sometimes known as ‘Cycle 5 off the Sub V’s progression’:

For all the nitty gritty detail about everything covered above, check out the workshop video from 6:00 onwards.

To demonstrate upper structure triads, Stuart referred to one of the tracks off Qualia, Great Ocean Road:

The upper structure triad concept is simple to understand but can give you really interesting chords as a result.

In the following example, you’re going to use the same root note for all the following chord voicings, which then superimpose different triads on top of this static root note.

This results in some colorful, modern sounding voicings you can use in your comping as well as in your compositions:

(Note: the following chords could potentially have other names and functions as well, below is only one way you could label each chord)

Great Ocean Road is full of this technique – watch what happens when I replace some of the chord names so that you can see what’s going on more easily:

Stuart goes into a lot more detail about the techniques he used on this tune, check out the workshop replay video from 22:25 for more details.

Quartal harmony is extremely useful for jazz composition and arranging, as well as for comping.

As quartal voicings are tonally ambiguous, the same shape can be used in many situations and still sound good.

At this point in the workshop, Stuart showed a neat trick of how to find various 4ths voicings, by playing a 4ths voicing chord scale based on E Dorian:

The title track off the album, Qualia, demonstrates the use quartal harmony in action:

Notice how, early on in the above chart, Stuart also plays with the root note movement to create some very interesting and colorful chords:

The workshop wrapped up with some interesting questions from participants as well as a couple of performances of the tunes from Qualia by Stuart on solo guitar (see the video from 44:13).

Special thanks to Stuart King for putting on this fantastic workshop! Hearing the examples directly off Stuart’s album Qualia bought these techniques to life for me, and the participants really enjoyed being a part of the session. I hope to do more of these types of workshops in the future. 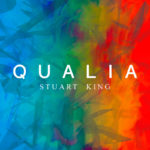 If you haven’t already, get your copy of Qualia here – Stuart King’s debut album of original jazz guitar compositions.

We’re both very proud of the work we have put into this album project and it’s a great resource for you to study some of these more advanced chord progression techniques that Stuart outlined in the video workshop above.

Thanks for reading! Did you find this workshop useful? Let us know your thoughts by leaving a comment below…

Stuart is a guitarist with over 20 years experience as a performer in many varied contexts, ranging from classical through to contemporary styles, musical theater, and jazz.

In 2005 Stuart graduated from the Canberra School of Music, Australian National University with a Bachelor of Music as a jazz performance major.

These days Stuart performs regularly around Canberra as a band leader, sideman, session guitarist and solo jazz and acoustic guitarist.

Find out more about Stuart at www.stuartkingmusic.com