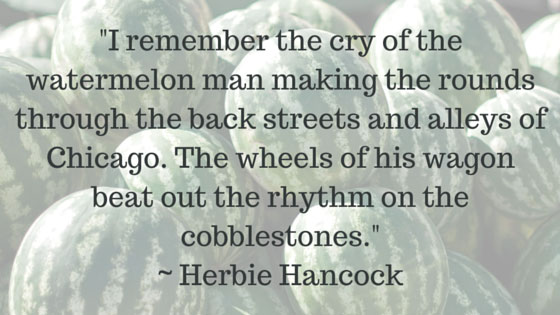 In the video lesson below, you’re going to get a step-by-step breakdown of how to play the classic Herbie Hancock jazz standard, Watermelon Man, on guitar.

We’re going to use this as an opportunity to work out some arpeggio shapes up and down the fretboard, and some other cool tricks you can use to spice up your soloing.

Don’t have time to read this post now?
Get your Handy PDF Download + Backing Tracks: Get access to a print friendly version of all the exercises in this post as well as FREE backing tracks for your practice.

It was so popular it even reached the top 100 of the pop charts at the time.

Over the years this jazz standard has been recorded over 100 times, but my favorite version is still the groovy original recording featuring Hancock along with solos from Freddie Hubbard and Dexter Gordon. Check it out!

This tune has an iconic piano riff that combines elements of bebop, jazz and R&B – with a pop twist to boot.

We’re going to use this piano riff for some soloing ideas in this Watermelon Man guitar version.

But more on that later…let’s learn the tune first!

(Hint: Fast forward the above video to the time code (in green) to get to the spot in the lesson that demonstrates some of the steps below.)

Check out the video above that includes a guitar TAB and notation of the melody to Watermelon Man as I show you how to play it.

You can find a lead sheet for this tune by clicking here.

In the key of F, the chord progression is a bit unusual as it’s a 16 bar blues, rather than a 12 bar blues (there are some extra chord changes added from bar 8 to bar 12):

Exercise: Comp with any basic chord shapes you already know along with the original recording.

There’s one thing that my good friend Matt Warnock taught me once I’ll never forget:

Jazz doesn’t need to be hard to sound good.

Some players that are first getting into jazz think that they’re not allowed to use pentatonic or blue scales anymore.

Nothing can be further from the truth!

After all, jazz is a development of blues – but blues is still strongly at the core of jazz.

Exercise: Have a go at soloing over the backing track with the pentatonic and/or blues scales below.

F Blues is exactly the same scale as F Pentatonic Minor, but with one note added – the b5:

If you solo only with pentatonic or blues scales, it’s going to get boring pretty darn quickly.

So, have a go at these two easy blues licks that you can whack into your Watermelon Man guitar solos.

Exercise: Memorize the licks and then play them over the backing track in whatever places that make sense to your ears. Then, mix them up with the scales from the previous step.

Step Five: Learn the Piano Riff (Impress Your Friends and Thwart Your Enemies) (3:26)

Check out the lesson video for a breakdown of how to play the piano riff from the recording (the notation and TAB are on the video).

As detailed in the video, you can take the hip double stop ideas (i.e. two notes played simultaneously) from the piano riff, and include them as yet another ingredient for your Watermelon Man guitar soloing.

Here are those double stops in all their glory:

Exercise: Put the backing track on again and solo only using double stops to get the feel for this technique. Then, mix it up with the blues licks and the scales above.

As you can see, you now have quite a few cool ideas to draw on for your solos.

Let’s look at another…

I can’t emphasize this enough:

A key feature of a good jazz solo is how it outlines the chord changes.

If you solo only with the scales and blues licks, it will sound a bit plain and won’t move along with the changes enough.

So, to help with this let’s incorporate some arpeggios.

Once you get familiar with this shape, practice moving it up and down the fretboard to match the corresponding chord change in the progression.

You can move the arpeggio shape up to fret position 6 for the Bb7 chord, and to position 8 for C7.

Let me help you out – play the following study that uses Major 6 arpeggio shapes over the changes to get them under your fingers:

A good way to jazz up the Major 6 arpeggios is by using enclosures.

For those of you that have read this blog before, you’ll know I’m a fan of these!

An enclosure is when you play one fret above and then one fret below a target note, e.g:

These sound great especially on the 3rd of the arpeggios, which gives a nice bluesy sound.

Have a go at the following exercise, adding enclosures to every single note in the F6 arpeggio:

Exercise: Solo over the backing track, incorporating enclosures over the Major 6 arpeggio shapes.

Then, mix everything together you covered in today’s lesson and solo your heart out!

Get The PDF and Backing Tracks

Fantastic! You now have this bluesy tune under your fingers.

Watermelon Man is a popular standard that’s often called at jam sessions, so it’s worthwhile getting to know it inside and out.

If you want a nice print-friendly version of this article for your music stand at home, along with backing tracks you can use for the exercises outlined above, click the link in the yellow box below:

Get your Handy PDF Download + Backing Tracks: Get access to a print friendly version of all the exercises in this post as well as FREE backing tracks for your practice.

If you enjoyed this Watermelon Man guitar lesson, please share it with your friends; it would mean the world to me.

Special thanks to my mentor Matt Warnock, who once showed me this innovative step-by-step approach to building up improvisation ideas over this tune. Check out his site at www.mattwarnockguitar.com.

I’d also like to thank Garry Petrisic who built the amazing archtop guitar featured in the video.

And finally, a huge thanks to you, the reader – I appreciate you taking the time to read this lesson. Now – go practice!